skip to main | skip to sidebar

A Surprising Kind of Bullfight 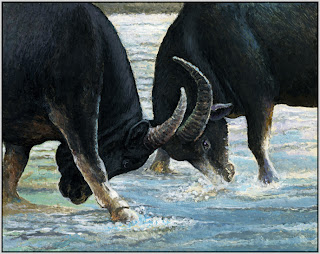 A Surprising Kind of Bullfight
(click photo to see more detail)
8" x 10" (20.3 cm x 25.4 cm) original acrylic painting on hand primed board $325 w/free shipping in US and Canada
To see past work  click HERE
To email Paul please click below:
This is a take-off and update of a posting done some years ago after traveling in China. In north Guangxi Province we were invited to see a bullfight. I had no idea what it would be and had visions of the Spanish bullfight where the matador attempts to kill the bull. We traveled several hours by dirt road to the mountain village of Wu Dong. Being the only foreigner in the village some of the children had never seen a Caucasian like me, so I was more of an attraction to them then the bullfight. 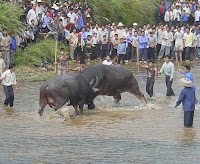 The fight was between two water buffalo bulls, not man against bull. The bulls are territorial so one would be sent up river in the water and the other would come down river. When they met, they would fight for territory. There were forty bulls in all to fight that day, so there were 20 runoff fights, then the winners would fight until all the bulls were eliminated except the grand champion winner and the fights lasted all day. A fight could last five minutes or in some cases half an hour. The bulls would sometimes lock horns and we saw several bulls lift his opponent off the ground by the horns as they struggled. The bull that turned and ran was the loser and the one who stood his ground was the winner. The most damage we saw during the day was a bloody nose, never a duel to the death. Winning bulls were highly prized and could be sold or bred for a lot of money, so the bulls were carefully protected.

There was no danger to humans as the bulls were fighting. People were standing all around during the fights and the bull handlers where right beside the bulls during fights as you can see in the photo. We ask one man about the fights and ask if the bulls were ever injured in a fight. He told us they were highly valued so they were never allowed to do much damage to each other.
At noon, we were invited to have lunch with the elders of the village. We joined them for a lunch of vegetables, rice, various kinds of meat and raw fish. I was asked to drink a toast with the top elder who then declared me an honorary member of the village tribe. I usually don't drink much alcohol, but in this case I did drink the strong rice wine as I figured it would cleanse any bacteria in the raw fish I was offered. This was just one of the many fantastic experiences we’ve had in our many travels in China.

Gargoyle, Grotesque or Chimera? A Sculpture from Notre Dame Cathedral 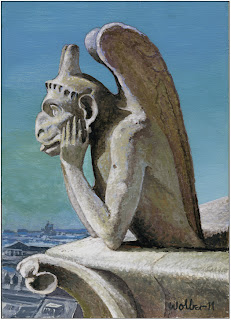 Grotesque from Notre Dame, Paris
(click on photo for more detail)
7” x 5” (17.8 cm x 12.7 cm) acrylic on hand primed board $125 with free shipping in US & Canada
To see available works in my dailypainters gallery click HERE
To receive email postings of my work click below or send email to Paul

This time of year our thoughts often turn to travel. This is a sketch from my last travels in Paris, a grotesque sculpture from the towers of Notre Dame Cathedral. This image is often called a gargoyle, but should be called a grotesque or chimera, since a gargoyle is really a waterspout sculpture used to direct the water away from the walls of the cathedral. It's a mythical image made up of parts of many creatures and intended to be a frightening image thought to keep evil spirits away from the cathedral. I've always enjoyed these creatures because they are so imaginative and fantastic.
© Copyright 2011 by Paul Wolber
All Rights Reserved
Posted by Paul Wolber at 12:33 AM 1 comment:

Paul Wolber
Michigan
The idea to do a daily painting began for me in November 2006 as a way to make paintings available to a growing number of collectors. Large original paintings cost more than many people are willing or able to pay, however small original works can be purchased for a reasonable price. It’s a very democratic idea to make art available so more people can collect original artworks. I create a new painting every few days with subjects varying depending on the ideas I'm currently considering. My paintings are acrylic on hand primed board with a 1/2inch edge to easily hang without a frame. All paintings posted are for sale unless indicated and I’ve shipped throughout the USA, Canada and internationally. If you see a painting you like, it may be purchased using the “Buy Now” button on my blog, my Daily Painters gallery, or sending an email to me. Because colors on a computer screen are not always accurate, when purchasing I guarantee your satisfaction or you may return the work for a full refund. Please take time to browse my blog archives above and enjoy the blog.___ © Copyright by Paul Wolber

See how the beginnings of these ideas developed for me in China HERE.